Trailwalker was hard; the hardest challenge I’ve ever undertaken. But it’s one I won’t forget in a long time. Here is my experience. 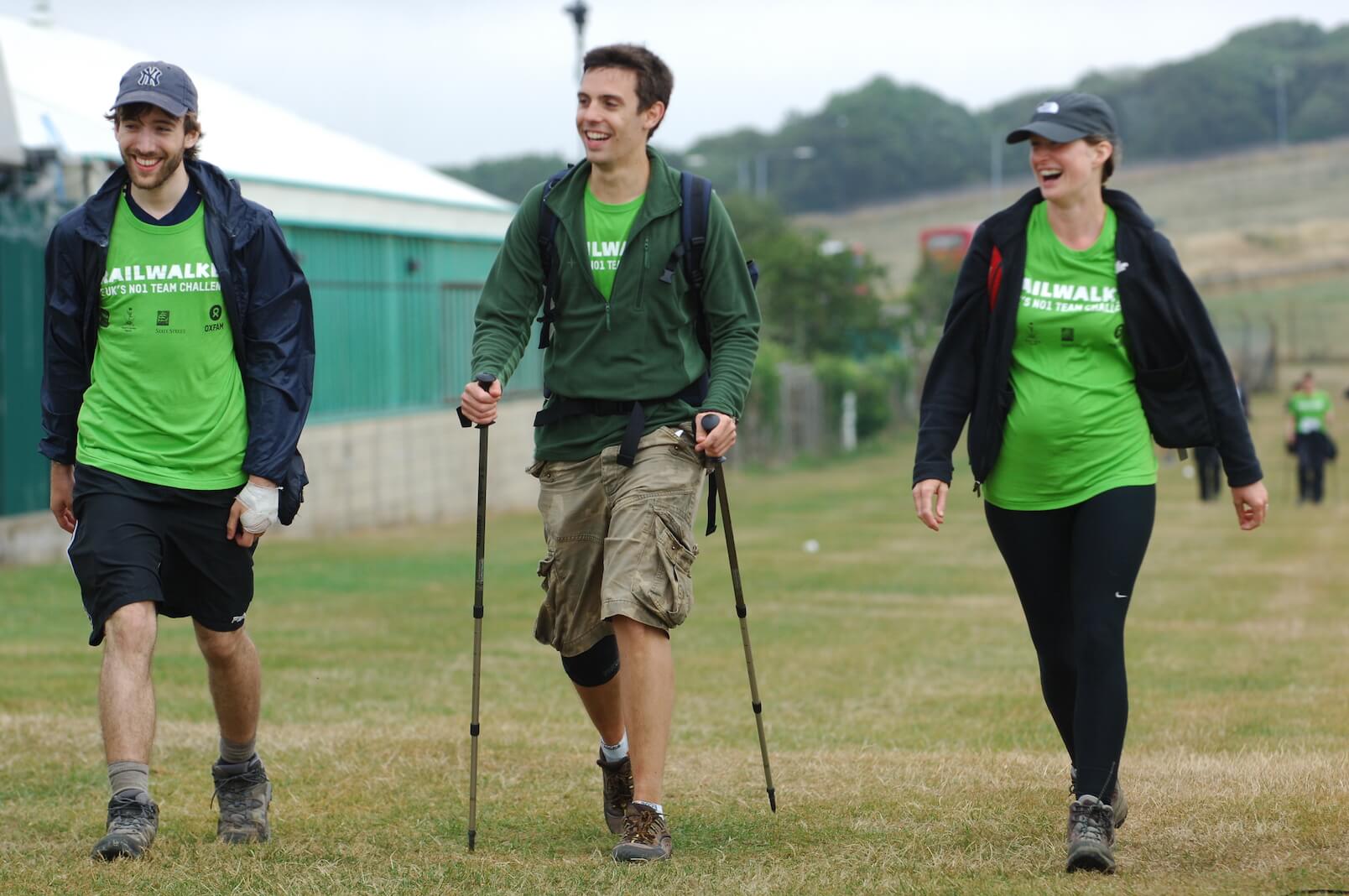 As a bit of background, Oxfam’s Trailwalker is a 100km endurance challenge started by the Queen's Gurkha Signals Regiment over 30 years ago. I was asked to participate by a couple of colleagues at work, and, having completed the Brighton Marathon less than 6 months earlier, agreed with little trepidation.

Fast forward what must’ve been about 9 months, and the three of us (Mike, Nichola and I - unfortunately our fourth member had had to pull out days before due to an ill-timed combination of injury and illness) were kitted up in Queen Elizabeth Country Park, Hampshire, ready to begin the challenge of our lives.

The first half passed largely without incident. 50km was a distance we’d walked in training several weeks before; the weather was perfect, the Support crews flawless and we were all very much enjoying the occasion. We were also making good time - despite starting 10 minutes late, we were ahead of our planned schedule.

At checkpoint 5 we received a couple of very welcomed additional guests as part of our Support crew. Despite the weather finally breaking, and rain beginning to fall, we set off in good spirits.

Stage 6. It rained. A lot. This particular stage - in fact every stage from this point onwards - we had covered in training so was familiar to us. But the constant rain for over 2 hours, whilst manageable, did take a hit on our morale by the end. I was cold, wet and missed the sunshine.

After a change of clothes and a cup of warm soup at Checkpoint 6, things were looking on the up again as we set out on a reasonably dry seventh stage, Botolphs to Devils Dyke. I don’t remember this stage being particularly difficult technically; Devils Dyke and the surrounding areas had become almost a second home to us in our training. However halfway through this stage I began to feel nauseated.

Throughout training I’d always been pretty hot on fueling my body. Eat and drink little and often they say. I’d studied the sorts of foods I should be eating, and briefed myself on rough recommended quantities and frequencies of consumption. What I hadn’t really bargained on was a feeling that prevented me from doing these things. In my case, nausea. Feeling sick is not a nice feeling at the best of times, but 2/3 of the way through a long distance walk, having been up for 18 hours, was definitely not the one.

I spoke very little that stage, my feet knowing the path to Devils Dyke, and my eyes being guided by the bright floodlights illuminating the Checkpoint. As far as checkpoints go, Devils Dyke was the “big one”. Teams are provided with a big meal, there’s a good support following, and even a little music. It also happens to have the highest drop-out rate. For those unfamiliar with the area, Devils Dyke is on the outskirts of Brighton - a 10 minute drive home. Unfortunately for me though, all I could think about was my seemingly worsening sick feeling in my stomach.

Devils Dyke - Checkpoint 7 - turned out to be our longest rest stop of the event. I was doing my best to eat what I could and Mike was away for long periods trying to get some medical attention for his knee. By the time we trekked onwards, I was feeling slightly better, and content with the short term knowledge that Stage 8 was the shortest of the lot - a modest 6.4km.

Despite the short distance, the feeling of sickness returned, fatigue began to set in, and I could feel myself wavering. My teammates did their best to maintain morale, but it was another stage where I remained mostly silent. Darkness had set in a couple of hours before, and it was very much a trudge to the next Checkpoint. Checkpoint 8 was very much welcomed - as was any form for rest at this stage in the event. I slumped in a chair, feeling about as worse as I had at any point.

I knew the fact that I was shivering and that the thought of consuming food wasn’t a pleasant one were not good signs. I put on a brave face and drank some tea, had a few sips of soup and ate a slice of bread. Mike and Nichola had gone off to get massages so I was on my own contemplating the next 2 stages. The next being the longest of the lot - a monolithic 15km. I knew I couldn’t give up. I’d beaten the “big one”; I was 6.4km closer to the finish. It was at this point the last few hours caught up with me, and I stumbled into the darkness and, well, left a marked impression on the landscape - a gift from my gut.

I knew this was not a good sign. I knew if my energy levels were wavering, they certainly would be now. But despite alarm bells ringing, all I could think about was how much better I felt. It felt like whatever had been pissing me off inside for the last 5 hours was gone. I thought about telling my teammates, but it didn’t seem necessary. I was feeling positive for the first time in hours, and, post-massage, Nichola and Mike also seemed to be in high spirits.

We knew what to expect from Stage 9. We knew it was going to be difficult, but we’d walked it on 2 occasions in training. What we could not prepare for though was the sheer monotony of it. When you’re on a half-day training walk, you don’t think about the walk. You talk, you joke, you appreciate the countryside. You don’t do that when this is your 80th kilometer and you’ve been walking 18 hours. The nausea stayed away for the best part, but the sheer mental agility required in the 9th stage was staggering. The floodlights for Checkpoint 9 - the beacon of hope as I remember coining it - was cruelly visible as early as halfway into the stage. When that’s all you have to aim for as you’re stumbling through the darkness by way of torchlight, time estimates, pace and logic goes out the window. 7.5km can seem like an eternity.

As we approached the 9th checkpoint - Kingston Hollow, the final major checkpoint, just 9.9km to go - the sun was just at the point in the morning sky where it was spreading a warming gold glow across the landscape. Despite the previous 3 and a half hours, it was the feeling of hope we needed to provide the final push.

After a sock and t-shirt change, and with us all now sporting our lime green Trailwalker T’s, purchased the evening before, we began the final slog to the finish. Standing in our way first was the mother of all hills (I forget the name). I’m fairly certain this hill finished off what was left of my dwindling energy reserves. The remaining 8k-or-so, whilst charged with optimism, saw my lagging behind my team mates and taking everything I had left to keep going. 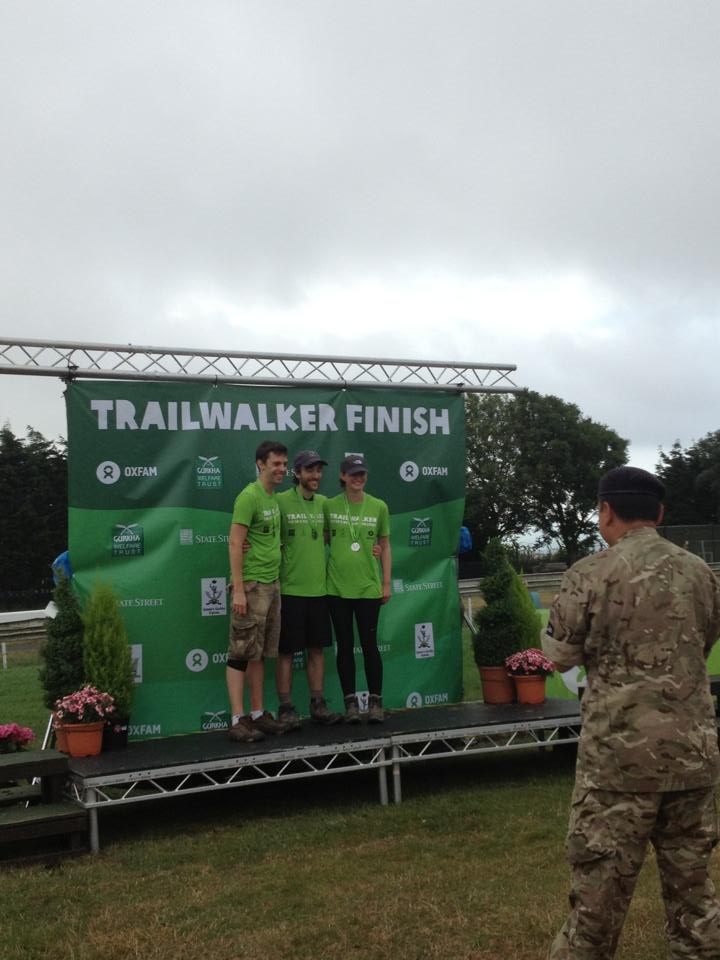 With sight of the Racecourse - the finish line - I knew the whole thing was almost complete. As we began the final kilometer, walking alongside the perimeter fences of the racecourse, it dawned on me I was probably the closest I’d ever come to spontaneously bursting into tears. It was a feeling I hadn’t experienced before. I wasn’t sad, but there was an overwhelming feeling of something inside that needed to get out. The tiredness, the physical excursion and the emotion of the occasion was likely bubbling over. Somehow as we approached the finish line, and I caught sight of a big crowd of people all watching, clapping and cheering our final approach, I sucked it up, and beamed my way across the line.

Probably one of the proudest moments of my life.

The above was largely a download of my consciousness that I wanted to get written down while it was still fairly fresh. I will read through again shortly and correct anything non-sensical. While I’m at it, I want to thank my teammates Nichola and Mike for pulling me through, as well as Andy, who was there in spirit, and in person at the finish line. This whole production could not have happened without our excellent Support crews - Kim and James, and their supporting members Chilly and Charlotte. You were as supportive as we could’ve imagined, and took care of our every need. And lastly, thank you to everyone for their continual words of support, before, during and after the event, as well as your kind donations to the cause. Final words go to the organisers of the Trailwalker. Absolutely sterling job. Everyone involved was friendly, enthusiastic and supportive throughout.